Brad Pitt and Angelina Jolie: Our Obsession with Divorce as Punishment 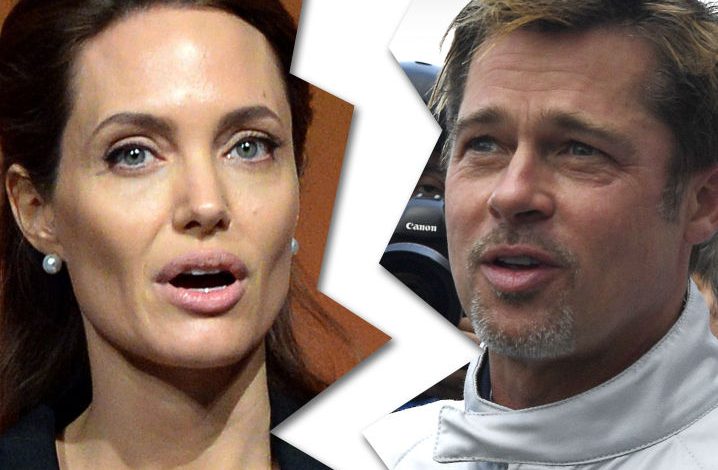 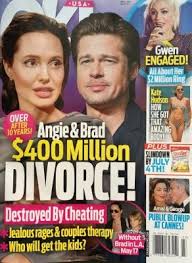 Brad Pitt and Angelina Jolie, aka #Brangelina is no longer!!!  Yesterday (on a manic Monday, no less), Angelina Jolie filed FL-100(Petition for Dissolution), which will be served on Brad Pitt.

As I opened Facebook today (my source for morning news), my feed was inundated with news about this split.  it overshadowed the bombings that just occurred in New York, Russian planes bombing, and even the election.

Why in the world does celebrity divorce even make the news?  Why am I blogging on this?  I am surrounded by divorce daily.  I wake up, make my kids lunch, then go sit at a desk where I am negotiating reasonable parenting plans, obtaining support, and helping couples divide up their assets (intricately co-mingled), then go back home and make dinner and kiss my husband every night.  This is certainly not new, or news to me, and I honestly don’t care that another Hollywood couple bites the dust.

We Have Been Conditioned to Seek Revenge in Divorce

The reason we care is because we mistakenly think divorce can somehow punish the wrongdoer.  In divorce, each side thinks the other is the wrongdoer.  We all want sensational stories – Jennifer Aniston died laughing due to vindication!  Brad Pitt smokes pot and will lose custody of the kids!  Angelina is withholding the kids from Brad because he cheated on her!  WE basically want another trainwreck like Amber Heard and Johnny Depp.

What you hear out there about custody battles, hidden assets, losing everything in divorce, is 100% all true.  Uber rich housewives reject and appeal billion dollar settlements.  Semi-rich couples sell all their assets, and housewives are forced to work minimum wage jobs.  Middle-class parents spend $500,000 on lawyers on custody battle.  Children are orphaned during the divorce process due to domestic violence.  These horror stories are all true. What you didn’t read in any of these stories, is that the REVENGE that each sought was never enough. Even if you won that custody battle, or got that billion dollar settlement, whatever it was, you never truly win.

If you ever find yourself in the process of separating/divorcing your spouse, I hope this post helps you.

Never use divorce to punish.

That’s right.  #neverusedivorcetopunish  Screen shot, hashtag, scream this out loud.  NEVER USE DIVORCE TO PUNISH!  If you are in a fight, don’t loosely throw the word “divorce” at your spouse.  It is disrespectful… and STUPID!  How many consults have I had the morning after a fight, where “divorce” was threatened?  A billion.  And about 50% of these consults are preventative legal advice, JUST IN CASE.

Never use divorce lawyers to punish.

Look, people.  We’re not bad guys.  For the most part, the world needs us to protect them.  And it’s really not our faults that divorces get messy.  Think about us as little children, doing exactly what we’re told.  All of us lawyers went to law school to learn how to fight, how to WIN, whatever it takes.  Classes like “Evidence” and “Civil Procedure” are taught so we can find loopholes.  Some of us may have had “Mediation” or “Negotiation” training, and some of us may even have read “Getting to Yes” (best book ever).   But that does not mean most of us even understand how to do anything other than what you are instructing us to do, which in divorce is always, “DESTROY OTHER SIDE”.

Divorce Lawyers are Not Weapons of Mass Destruction

This is an actual email I received:  “I am going through a divorce.   I need a SHARK.  I need you to DESTROY my husband.  It will get ugly.”  or “I caught my wife cheating.  I need you to make sure she NEVER gets custody of our kids.  I am NOT going to pay support to the cheating bitch!”  So, most lawyers are natural people-pleasers, and will do exactly what you tell them to do.  Which involves throwing grenades at ants.  You want sole custody?  Let’s throw some domestic violence in there, with a side of supervised visitation.  You make 7 figures, your husband stays at home, and it’s a 12 year marriage?  No problem, let’s request no alimony and termination of jurisdiction, on top of it.  Let’s just do WHATEVER it takes (destruction, hell, come what may) to make clients happy.

The problem is, you are telling us one thing.  But when obtained, it likely yields more battles.  Because in divorce court, a temporary win doesn’t stop the war.  There are more motions filed.  Writs.  Appeals.

You get a kickout order against your spouse?  Great, but it’s temporary, and congratulations, you have destroyed your spouse and any trust he/she has in you.  Now you better watch your back because you know they will come after you.  Now, you will need to fight for support.  You get sole custody for 20 days – but now your children need counseling.  You fight for 5 years and now you have no more money.  Everything comes with consequences.  And people, please understand this when you hire lawyers that they are NOT mental health professionals.  Most of us are NOT equipped to peel back your the hatred and anger and unveil what is really in you and your children’s best interests.  That’s not our jobs.  Many divorce lawyers are exhausted and their jobs are killing them.

In a nutshell, people think they are hiring divorce lawyers so they can use the law in the nastiest degree against the other side.  And someone – most likely everyone – (except the handsomely compensated attorneys) will lose.

If you are going through a separation or divorce, and you are too busy to research laws, than please do your research and find an attorney who is NOT a pitbull.  Find someone who is able to tell you objectively what the laws are regarding custody, support and property division.  Ask them what the best case and worst case scenario is.  Ask them if they represented your SPOUSE, what would their strategy be?

Never use divorce lawyers to punish.

Never use divorce courts to punish.

Most people think court is the place where “justice is served”.  After all, this is why I went to law school!  Bright-eyed and bushy-tailed, I wanted to RIGHT all the WRONGS, and put bad guys in prison and make bad guys PAY.

The problem with divorce and court is that there isn’t necessarily a “bad guy” (gal).  One of my favorite family law judges (God rest his soul) said, “Hitler does not marry Mother Theresa”.  It’s true!  In divorce, there will NEVER be one bad guy and one good guy.  Divorce is the falling out of a marriage.  It takes two.  Sure, someone may have been unfaithful.  Someone may have failed as a spouse, a parent, whatever.  But generally, in the law of relationships, it takes two to tango, and for the most part, it is not entirely someone’s fault.  BOTH usually have contributed to the downfall.  Or maybe the marriage was just wrong to begin with.

Divorce Courts are Not in the Revenge Business

Family courts don’t deal with emotional issues.  In marriages with children, most important are the children’s interests.  HOW do we protect these children from warring parents?  Is it not our primary duty to shield them from harm, to ensure they maintain bonds with both parents?  Why fault a pot-smoking parent when the other parent openly accepted this until their separation?  The courts focus is on children: how can they structure a plan so kids don’t lose bonds with a parent who is moving cross-country to marry someone else?  How?

Even in support matters – how do courts deal?  Courts are interested in protecting both sides so that outspouses are not left on the street to starve, and their housing is taken care of.  But ensuring that there is enough for TWO families when there wasn’t enough for ONE is impossible.  Everyone is at a loss, and everyone suffers.  Yes, there is a “guideline” support, but whatever is entered is garbage in, garbage out.  Everyone is crying “hidden assets” – “purposeful unemployment” – and there are SO many allegations.  No, you simply don’t get your day in Court.  It’s impossible.  Courts cannot (and should not) handle the volume of petty complains which stem from the everyday emotions of family law.

So back to Brangelina.  Who gets custody?  Why did Angelina check the box for “custody” and give Brad “visitation”?  Custody and visitation are the same.  If you have visitation, you have custody.  What they need to do now is to figure out a parenting plan that works for the 6 children, so they will maintain relationships with both mom and dad.  Why does Angelina not want spousal support?  Because alimony is not to punish.  If you are self-supporting, and it was a shorter marriage, there is less reason to award spousal support.  Why did Angelina check both pay their own fees?  Because both have equal access and ability to pay their own attorneys.

In the end, Angelina’s 3-page FORM divorce filing should never have triggered so many stories.  They have been together for 12 years, married for 1.  In the end, I hope they will work out a private settlement, amidst healers.  It’s not either of their first rodeo.  This is Brad’s second and Angeline’s third divorce.

Instead, we should allow them this respite from the press.  After all, there are about 1,000,000 other divorces going on, and our OWN marriages to tend to.