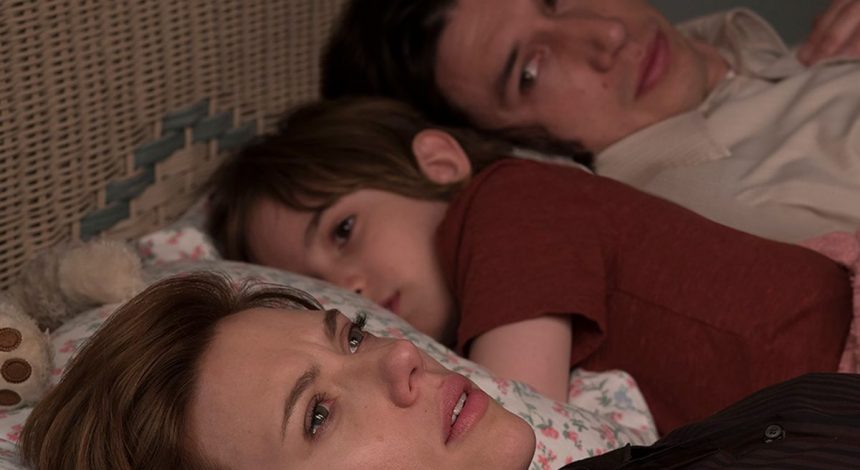 “I had to get my own asshole!” screamed Adam Driver’s character, Charlie, at Nicole (played by ScarJo), when she asked, “Why did you switch lawyers? I liked your first one.”  (Charlie’s first attorney was kinder, cheaper, and gave better advice, but in the world of divorce, kind  = weak, and he certainly was no match for Nicole’s manipulative, Louboutin-wearing bulldog attorney).  Incidentally, what is it about these red-bottomed shoes that attract bitches?

Anyway, Charlie had to get his own asshole, because his first one was impuissant.  This memorable line “asshole line” was uttered after a painful court hearing where as usual, NOTHING happened. NOBODY won.  Instead, the court maintained status quo and ordered parties to return after custody evaluation.  (The fight was over whether their son will stay in LA or go back to New York after the agreed-on temporary stay is over).

This court scene was incredibly accurate.  Obviously, it was filmed at Stanley Mosk: fluorescent lighting, distinct vomit-ivory walls, uncomfortable 3.5-seater long benches, asshole lawyers schmoozing and outdoing each other, bailiffs with weapons separating a non-English-speaking couple on the verge of domestic violence, and of course, the waiting, waiting, waiting for Godot, in the hallways replete with stress-inducing factors, truly the “unhappiest place on earth”.

Court is Uncomfortable and Stressful

Incidentally, all of these external factors is what makes Court so unbearably stressful.  Family law litigants often go to Court thinking it’s WAR, but the hearing is actually only one of many battles that will occur before the inevitable settlement.  While you may go to Court once (or twice) in your divorce case, these are merely hearings on issues of custody, support, discovery – and very few cases actually go to full-blow TRIAL on all issues.   My favorite part of this movie is the focus on how little the court actually helps resolve conflict.  That even after your lawyer brilliantly twists words and throws tantrums for you, and the other side doing the same for your ex, the Judge shrugs it off as I have done to my children, many times. (Because it’s petty and stupid, that’s why).

The case would never have even gone to Court had Charlie listened to his first, peacemaking lawyer named Spitz.

Case Didn’t Settle Because Charlie Hired His Own Asshole

Spitz and Nicole’s lawyer was prepared to settle the case in Court.  But their plans were derailed when Charlie fires Spitz and hires the new $950 per hour lawyer, with his $450 per hour associate carrying his briefcase.

Nicole’s lawyer stands up yelling, “Aw Hell NO.  This is war!”

Confused, Nicole looks at her lawyer, who explains: “Charlie hired a new lawyer – all bets are off.”

The settlement conference (which, by the way, is usually held in chambers, not at the table) obviously failed, because both lawyers are interrupting each other, and verbally shredding the other’s clients with irrelevant ad hominem attacks.  End result: NOBODY WINS.  Judge announces he isn’t making any decisions today, and rather, things will remain status quo until he can get through his caseload and obtain a report from a custody evaluator.

Charlie had to hire his own asshole, because his first lawyer was TOO nice, and only $450 per hour.  The meeting with the first lawyer Spitz was heartwarming.  The office was modest, and his wife was his secretary.  She read a book to the son while Charlie met with Spitz.  Spitz had a different philosophy than the $950 per hour lawyer. He was more of a peacemaker, and more human.  But caught in a tornado of emotions and the desire for “winning”, Charlie had to fire him and  “get his own asshole”.

Cut to scenes of Charlie writing $25,000 checks to pay legal bills, and Nicole admitting her mother took out a home equity line of credit against her home to finance her lawyer.  “But I thought I paid for your lawyer?” He said.  “No, that was only 30%.”

In the end, after all the money is spent, and a total stranger visits both homes to watch them eating with their kid (custody evaluation), the parties do end up settling.  (As most divorces do)

The movie does a good job portraying the roles of the lawyers.  Nicole’s super-skinny high-powered lawyer (well-played by Laura Dern)  strikes a balance between fake and genuine.   Dressed to perfection in Chanel and Louboutins, and offering tea, cookies and hugs to her clients, she’s also capable of exaggerating confidential information to destroy the other side.

My favorite part was when she reprimands Nicole for saying, “My son can be an asshole sometimes”.  “NEVER SAY THAT! Society will never accept a wine-drinking mom who calls her son an asshole”.  She then  launches into this unique monologue about our how Judeo-Christian society has a double-standard for shitty moms v. shitty dads, the latter being excused because God was the original shitty absent dad.  Brilliant acting.  In any case, Nicole’s lawyer wasn’t money-hungry.  She wasn’t depicted as “going after hidden assets” or even “half the grant money that was community”.

Instead, she played more of a life-coach role, supporting Nicole in her move to Los Angeles from New York to pursue HER OWN DREAMS.  Sure, she had to use some legal manipulation to establish residency, but in the end, she wasn’t the “money-grubbing” lawyer  most divorce lawyers are made out to be.  AND, she hung out with Nicole, going to her house parties.  (She doesn’t have boundaries!!!)

Charlie’s first lawyer was an older man named Spitz who pick up Family Law after he retired.  Divorced three times, he told Charlie “You remind me of me on my second marriage.”  Spitz related better to Charlie, and gave him more sound advice about his son and human decency.  And he advises, “We stay out of Court because courts in California are a disaster.”  (So true!)  Spitz goes on to advise Charlie (who is living in a hotel) to get an apartment so it would look better for him.  But then contradicts himself by telling Charlie if he gets an apartment, it looks like he has a permanent residence out here, so will be harder to prove he lives in New York.  Finally, he tells Charlie he needs to do what’s right for his son, and his son is happy out here.  The movie portrayed Spitz’s human decency as “weak” and thus, Spitz was replaced.  (But Charlie ended up listening to Spitz’s advice in the end).

Charlie’s Second Pitbull Lawyer Was the Perfect Asshole; But He Messed Things Up More

Charlie’s second lawyer was the perfect asshole, with the same type of expensive offices as Nicole’s lawyer, complete with pillows that say “Eat Drink and Remarry”.  He didn’t know or care what was in the best interests of Charlie’s son, nor could he remember his name.

“We need to get your son Fred back to New York.”

Associate, speaking for the first time, after strictly being a note-taker the entire time camera is on him:  “My son’s name is Fred.”

In the end, Nicole and Charlie both decided after going through so many hundred of thousands in attorneys’ fees, that they could have just done it through divorce mediation.

Every Divorce Is Really Just a Marriage Story.

This movie was about divorce.

But it was aptly named Marriage Story, because every divorce is about a marriage.  A prior union.

Divorce is about broken hopes and dreams, bank accounts, and families.  In a divorce, the lawyers can decide to be a solution or a problem.

Preliminary Declarations of Disclosures: Be Diligent!
How California Courts are Responding to COVID-19 Issues
What is a Step Up Parenting Plan?
Divorce: Restructure, NOT Destruction
Donald Sterling Finally Files for Divorce!!
How Many Rings Are There in a Marriage and Must I Return Them in Divorce?
Motion for Reconsideration: Not for Me But Maybe For You?
Bifurcation of Marital Status: Divorce
California Summary Dissolution of Marriage
Bad Behavior in Family Law
Forensic Accountants Divorce
Emancipation of Minor in California