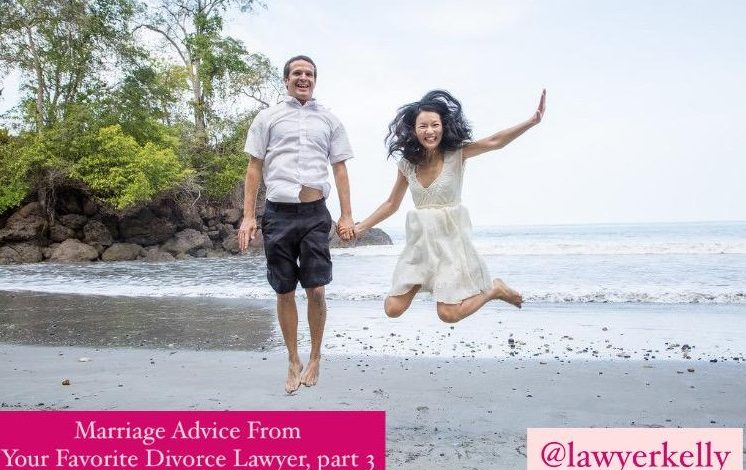 Disclaimers: At the time I wrote this, I had been a divorce lawyer for over 20 years, and married for 12.

You can read Part One and Part Two for more useless advice.

Honestly, I don’t know why people seek advice from other people who are married.  It’s not like we really know what’s up.  Truth is, as long as you are married, you gotta work at the marriage and you are never safe from divorce, whether it be 1 month or 31 years of marriage (Sarah Palin, for “incompatibility of temperament)

My mother loves gardening and nature and fruits and trees.  She always said, “You gotta water it, you can’t not water it.”  I may not have listened to her about the plants in my office (which have all since died), but I adhere to this watering theory every day in my marriage.

Nevertheless, since people always ask me, “Since you see divorces every day, is there any insight you can share about marriage?”, I want to be helpful, and hence I write.

Don’t be an asshole to your spouse.

My profession is one of those special professions that guarantees there will be assholes spouses.  We all have assholic tendencies: it has to do with the fall of Adam and Eve, and free choice.  Even Mother Theresa and Ghandi must have moments where they struggled against and won against their inner asshole.  What is an asshole?  Webster defines it as “a stupid, annoying, or detestable person”.  If you have social media and are active on it, and have posted selfies and such, chances are you have been an asshole.  Ever bashed someone’s political, religious, ethical, moral, spousal, edible choices?  Asshole.  If you really want to see some assholes at work, visit my Facebook page. If you are going to be an asshole, do it somewhere outside of home.  And if you don’t have a job, go to the gym or store, or drive around and cut people off.  Let out your inner asshole and then come home and DON’T BE AN ASSHOLE TO YOUR SPOUSE.

Stop comparing your marriage with other people’s.

People are assholes on social media.  They post what they WANT you to see, and not what their pathetic lives are. (including me!)  What you see on Facebook is a single SNAPSHOT with filters on their lives.  (I know, because so many of these perfect marriages – you know, the ones where the couple goes OUT of their way to write tributes and kissy-kissy stuff to each other – have CALLED my office).  And it ALWAYS goes something like this, “Becky!  So good to see you!  But you were just making public love in the Maldives on your annual love trip! What happened?”

Becky (in between a caucaphony of nose-blowing and sobbing), “That’s just FACEBOOK.  He’s been cheating on me for a long time, the Maldives was to make up for it”.

Stop comparing yourself to all this horseshit.  Maybe their marriage appears perfect on Fakebook.  “That’s just FACEBOOK”.

Stop Comparing Your Spouse to Others.

So, you’re pissed off that you’re always at home by yourself, and your friend Elaine always has dates with her husband.  You’re also pissed that your husband forgot your anniversary.  Instead of being mad at your spouse, maybe look around.  Do you have a roof over your head?  Electricity?  Food on the table?  Children you can feed? Do you go to work and EARN a living?  Maybe instead of getting mad at your husband for not doing something Elaine’s husband did for her, maybe you can THANK your husband by making love to him tonight when he gets home late from work.  (Of course, if he is late because he is having an affair with Susie Secretary, ignore this part).

And you over there – husband!  Are you pissed off that Ken’s always bragging about his sex life with his wife Barbie?  She’s hot, young, cooks him special meals, and gives him blowjobs every Tuesday at 11 pm.  Instead of being mad at your wife, maybe take a look around your house.  Is your underwear clean and folded?  (I once had a spiteful wife purposely fold underwear inside out to piss off the husband).  Do you have a meal on the table?  Are you kids to and back from activities?  Do your kids have homework done and birthday parties to go to?  Is your wife an excellent singer?  Maybe you should dump your friend Ken (he’ll lose half to Barbie in his eventual divorce because he BRAGS about his personal sex life anyway).

Stop comparing yourself to bozos.

Stop marrying for money and/or sex.

It never works, just trust me.  As one of my clients said, “Marrying for money is for amateurs.  Everyone knows you DIVORCE for money.”  Duh.

Turn off the phone and go camping.

Actually, no.  Camping can be extremely stressful (no hot water, showers, beds?  No thank you).  Just TURN OFF THE PHONE.

Eating out too much is unhealthy, requires little effort, and puts on weight, which impacts sex life.  I cook every day.  It’s the one time during the day I don’t check my phone.  Chopping, chopping chopping is actually therapeutic – it’s my equivalent of “meditating”.  (I can’t meditate because I feel it’s a waste of time to just sit there.  At least when I am chopping onions and garlic, I am doing something).

Don’t skimp on your sex life but don’t mistake how many times you do it with how awesome that ONCE a month is.

It’s quality, not quantity.  If you want more quantity, focus on QUALITY.  Also, if you’re not having sex as much as you like, maybe you’re not as emotionally close?  Before marriage, women play at sex to get love.  Men play at love to get sex.  After marriage, the play is usually gone, and therefore, the sex.  Take the time to get to know one another and get emotionally close.  It will guarantee more sex.

Look around, do you have too many shoes?  Cars? Clothes?  I’m a big fan of Marie Kondo. (well, before she turned around and started selling us SHIT for a lot of money).  I think the less shit you have, the less shit you carry around.  If you are shopping too much, you aren’t working enough.  (Trust me on this, when Amazon packages start showing up on the doorstep, it means I need more clients.)

It doesn’t have to be paying.  But have some purpose in your life.  Don’t you ever have a marriage where one person RELIES on the other completely for purpose, money, amusement, entertainment, etc.  Don’t be boring.

Contribute to your marriage.

I can’t think of anything else for now.

People, just stop prematurely filing for divorce.  Trust me, so many marriages could be saved if you just follow some simple common sense and stop being assholes to each other.

And that concludes Marriage Advice From Your Favorite Divorce Lawyer, Part 3.

How California Courts are Responding to COVID-19 Issues
Dos and Don'ts With Your Divorce Lawyer
My spouse is unfaithful! Can I punish him?
Motion for Reconsideration: Not for Me But Maybe For You?
Co-parenting with Difficult Ex
Move Away Custody Relocation Requests California
If Jessica Simpson's Entire Prenup is Thrown Out...
Missouri Appeals Court Rules Embryos are Property, NOT Life
Divorce and Self-Victimization
Why is my divorce taking so long?
Divorce Mediation with Kelly Chang Rickert, Attorney Mediator
Student Loans Separate