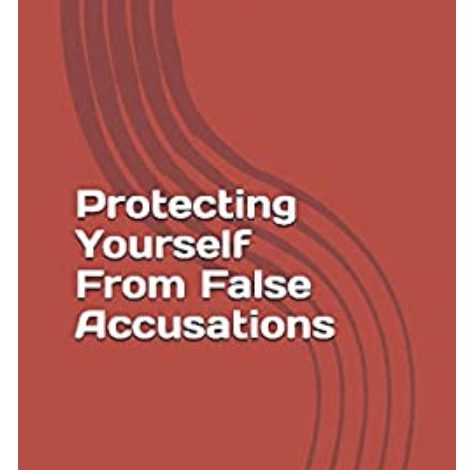 I have attached an excerpt from our book.  It is available through Amazon.com on paperback and Kindle.

First, we stand by victims. Unfortunately, sexual abuse and assault happens. Both of us, as female attorneys, have experienced it firsthand. If you are the victim of domestic violence, please call the National Domestic Violence Hotline at 1-800-799-SAFE (7233).

However, this book is not about the sexual abuse or assault. In this modern day, the pendulum has swung too far and many victims are the falsely accused.

We were very apprehensive about writing this book because we were afraid it would be misconstrued. We are not writing this book for true accusations that unfortunately happen too often. If a woman does not consent, her life path is stripped away from her control and it is tragic, unfair, and inhumane. No one should have to go through that pain and we support victims and stand in solidarity.

Unfortunately, persons are falsely accused for three main reasons: mistaken identity, mistaken consent, and malicious intent by the accuser. We hope that this book will help unblur the lines between consent and mistaken consent. After all, if a person does not 100% consent to the encounter, it is thereby coerced and that person has committed a crime against humanity.

We call ourselves feminists because we wish to stand up for the rights of women and men. If a person is falsely accused because of mistaken identity or malicious intent, we want to give hope that their good name can be cleared. Unfortunately, we’ve seen too many people lose their lives to false accusations.

There are several types of restraining orders in Family Law. The most common one (and the easiest to obtain) is the Temporary Restraining Order. (TRO). TRO’s are typically granted by alleging a “recent incidence of domestic violence”. What constitutes “domestic violence” can be as severe as “serious bodily injury” to something as vague and minor as “disturbing the peace”.

Many family lawyers are aware of this low threshold and immediately file a TRO to start the case. In fact, some unscrupulous lawyers may argue it’s MALPRACTICE NOT to start the case off with a TRO because the end result is usually a total and complete win for your client: temporary sole custody and a kick-out order granting exclusive occupation of the family home.

In California, Domestic violence temporary restraining order’s (DVTRO) are liberally granted without any evidence, on declaration only. All the Petitioner needs to do is allege any of the following: intentionally or recklessly cause or attempt to cause bodily injury; Sexual assault; placing a person in reasonable apprehension of imminent serious bodily injury to that person or to another; abuse not limited to actual infliction of physical injury or assault; molesting, attacking, striking, stalking, threatening, sexually assaulting, battering, credibly impersonating as described in Section 528.5 of the Penal Code, falsely personating as described in Section 529 of the Penal Code, harassing, telephoning, including, but not limited to, making annoying telephone calls as described in Section 653m of the Penal Code, destroying personal property, contacting, either directly or indirectly, by mail or otherwise, coming within a specified distance of, or disturbing the peace of the other party and their family members.

Basically, it is a very low threshold – anything from an email can constitute “disturbing the peace”. As long as the petitioner alleges in his/her declaration they have a subjective complaint, the DVRO is granted, without any proof or hearing.

Once a DVRO is granted, the petitioner is handed over keys to the family law kingdom: temporary sole custody, exclusive use of the residence, support.

Lack of Due Process

So why not DEFEND against these false accusations?

Because in many cases, the Petitioner DOES NOT GIVE NOTICE.

Only in Family Law do we see such a rampant abuse of violation of due process. In California, you can escape the due process requirement by simply alleging you have a subjective belief that the “abuse” (something as vague as “disturbing the peace”) will continue if you provide notice.

Thus, armed with knowledge, a lot of determined family law litigants falsely alleged DVROs so they can gain an advantage over custody.

Knowing this, men and women who are going through a divorce should be careful. There are the warning signs:

If you and your partner’s relationship is volatile, please be wary

If you have a choice, do NOT be alone with them.
Do not engage in any conduct that can be misconstrued: don’t roughhouse your children, don’t throw things, don’t tell sexual jokes.
If you’ve never had a firearm, do not get one now.
Tell your friends and family that you suspect your partner is about to falsely accuse you.
Do not engage in intimate behavior with your spouse, who can later accuse you of rape.
If you have a particularly heated argument, calmly walk out. Go to your friend’s house. If you need to pick up your belongings, have a witness come with you to get them.
After a particularly emotional argument, seek legal advice and consider obtaining a restraining order against your partner first.
Document any incidents or conversations that could later be an issue.

What if a DVRO has already been issued?

A restraining order is a court order. It can order the restrained person to:

Not to contact the Petitioner, their children or relatives;
Stay away from the Petitioner’s home, work, or children’s schools;
Move out of of the family home (kick-out order) ;
Not have a gun;
Follow child custody and visitation orders;
Pay child support;
Pay spousal or partner support (if you are married or domestic partners);
Stay away from any of your pets;
Transfer the rights to a cell phone number and account to the protected person (read more);
Pay certain bills;
Not make any changes to insurance policies;
Not incur large expenses or do anything significant to affect your or the other person’s property if you are married or domestic partners;
Release or return certain property; and
Complete a 52-week batterer intervention program.

Once the court issues (makes) a restraining order, the order is entered into a statewide computer system (called CLETS) that all law enforcement officers have access to. And that restraining order works anywhere in the United States.

There are many victims of false accusations in Family Law. If you are such a victim, your world is ripped apart and I am sorry. False accusations are gut-wrenching – you will feel empty, outraged, scared and sad.

First, understand YOU ARE NOT ALONE.

Because of the ease of TRO’s and the fantastic outcome of the Petitioner, I would conservatively estimate at least 70% of contested Family Law cases start off with a DVTRO.

Second, the TRO does NOT last forever.

It usually lasts until the evidentiary court hearing, which is usually set within 20-25 days. You have an opportunity to respond to the TRO, and you should.

Third, sometimes you have better legal standing when you’re not just “defending” a TRO.

Because of the low threshold, BEFORE a TRO is issued against you, you may want to research the viability of your own TRO. In my experience, competing TRO’s are much easier to resolve than playing defense. I am absolutely NOT advising you to ever file a fake TRO – I am just saying to prepare yourself if you ever find yourself in that situation.

Fourth, if the accuser reaches out to you – do NOT accept texts/phone calls.

Document all evidence of them trying to reach you. Do NOT succumb to any manipulations to respond, as the consequences of violation of a TRO are exponential.

Sixth, talk to a friend and family.

You must be strong.