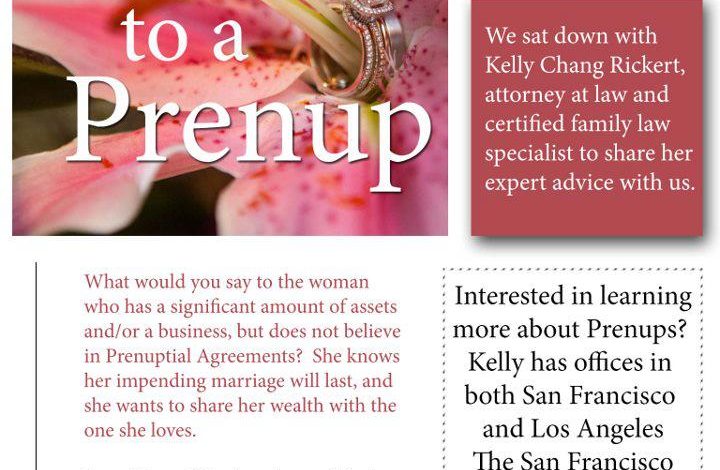 January is divorce month.  As soon as the new year bell tolls, people dig into determined changes for the year.  Since I became a family lawyer in 2000, I have been interviewed every beginning of the year about the subject of marriage and money.

In January 2011, I was interviewed by NPR Marketplace in a segment called, “Financially Preparing for a Divorce”.  The segment focused a LOT on premarital agreements.  You can read the transcript for this show and listen to it by clicking here.

In August 2017, I was interviewed again by NPR – Larry Mantle’s Airtalk, in a segment called, “Buzzkill or just being practical? A look at the modern-day prenup”.  You can read the transcript and listen to it here.

In the advent of the world’s richest man, Jeff Bezos’, impending divorce, I again find myself on the radio, discussing prenuptial agreements.  The segment is attached.

Avvo and Kelly Chang Rickert Discuss Social Media and Law Practice in 21st Century
Marriage Advice From Your Favorite Divorce Lawyer, Part 5
Palimony
Why You Need a Prenup
It's Never About The Money In Divorce (Maybe in Marriage)
Conflict Resolution Essential Skill Divorce Attorney
How Much Is a Divorce?
Can't buy me love...or jurisdiction
Marriage Advice From Your Favorite Divorce Lawyer, Part One
Prenuptial Agreements Should Be Like Sharp Knives
Bifurcation of Marital Status: Divorce
Stop Asking for Sole Custody: Children are Not Property