Divorce and Double-Dipping Pensions and Businesses 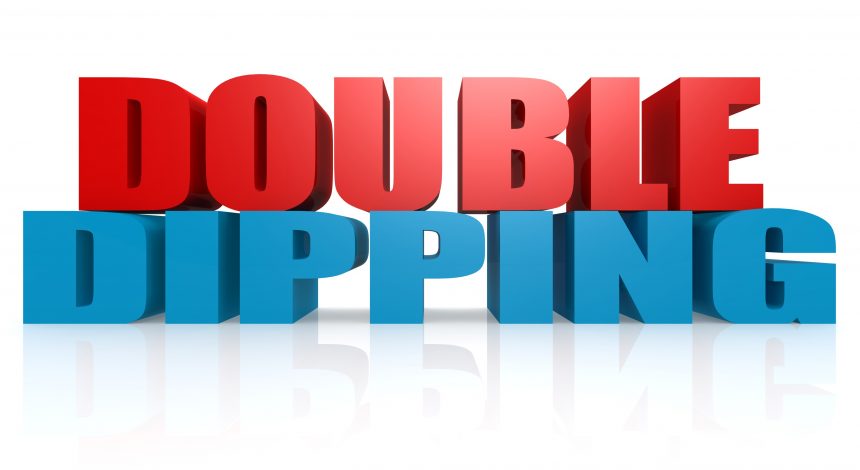 Divorce and Double-Dipping Pensions and Businesses

Double-dipping is gross and spreads germs.  You should only be in favor of double-dipping when you represent the outspouse. The rest of the time, it sucks.

Generally No Double-Dipping Pensions/Retirement, But…

Double-Dipping is generally barred in pension/retirement.  Thus, if you are the payor, and you already paid your ex-spouse half your pension, you are done.  Later, when you receive it as an income stream, you should NOT have to then pay support from it.  Though it is generally barred, there is one California case, 192 Cal.App.3d 1022, B017912, In re Marriage of White  that seemed to think perhaps it IS possible.  In that case, the Husband was awarded his pension, the Wife the house.  Husband was paying spousal support to Wife.  The husband later suffered a work injury and stopped spousal support.  Wife came back to get more spousal support by claiming Husband now has more income.

The Court said this: “…the flaw in the ··double dipping” argument is that spousal support considerations are separate and distinct from property division concepts.”  They remanded and sent back to trial court.

What about for division of a business?  Let’s say you got Blackacre Factory in the divorce.  It was valued at 1 mil, and you bought out your spouse’s interest for $500,000.  Do you still have to pay her support from income received from Blackacre Factory?  YES.

Two Differences Between Pension and Business

Opponents of double-dipping a business say that it should be treated like a pension.  However, there are two major differences between a pension and a business:

Where Business Cash Flow Reinvested to Capitalize, May Avoid Double-Dipping.

However, distinctions can me made where business cash-flow is reinvested to capitalize or diversify a business. In 2009, the California Court of Appeal held that a trial court acted within its discretion in calculating an obligor’s income for spousal support purposes without including funds derived from the obligor’s company that he used to diversify the business so that it could remain a viable entity, thus attributing t hose funds to the business instead of the obligor, where the reinvested funds were reasonable expenses properly chargeable to the business. 176 Cal.App.4th 1438, H031574, In re Marriage of Blazer

In Marriage of Blazer, the parties were married in 1982 and separated in 2002. Husband was a partner in Blazer-Wilkinson, LLC ( BW), a brokerage company that bought and sold produce. Temporary spousal support was set at $57,224 per month during the pendency of the divorce.

In 2004, the trial court valued the community interest in BW at $5,600,000. Wife received other property plus an equalizing payment of $1,340,000 for her share of the business. Temporary spousal support was reduced to $52,000 per month pending further findings of the court.

In 2006, temporary spousal support was reduced to $30,000 per month retroactive to August 2004 and permanent spousal support was set at $20,000 per month beginning January 1 , 2006. In determining Husband’s income available to pay support, the court excluded profits from the business. which were needed to maintain adequate capitalization and to diversify. All other profits were considered as available to Husband. The court specifically rejected Husband’s argument that his buyout of Wife’s interest in BW was a factor that should eliminate spousal support.

Wife appealed the decision, arguing that the trial court abused its discretion by excluding a portion of husband’s income when considering his ability to pay support. Husband cross­-appealed on the grounds that the support order unfairly allowed the wife to ”double dip” into the income stream from his business

Court of Appeals Disagrees with Wife, Must Maintain Capital for Business

The Court of Appeals disagreed with Wife, finding that there was a need to diversify and to maintain adequate capital in the business. In reaching its decision, the court relied in part on the California child support statute, which excludes income required for the operation of a business from income. Thus, amounts required to achieve such were not available to Husband.

It should be noted that credible expert testimony from a CPA to the effect that reinvesting the funds was necessary for Husband’s business to survive likely swayed exercise of the trial court’s discretion in Husband’s favor without such credible testimony, a contrary result (i.e., charging Husband with the funds reinvested in the business for purposes of determining his ability to pay spousal support) may well have been reached.

The Court of Appeals also disagreed with Husband. The Court’s decision was based primarily on the lack of evidence before it that BW had been valued using a stream of future income. Although Husband’s expert testified that he assumed that BW had been valued using the capitalization of excess earnings method that implicitly ties the val ue to Husband’s future earnings, the court was not convinced. In fact, the court stated that even though the expert’s testimony had not been contradicted, it was not conclusive to either the trial court or the Court of Appeals.

Thus, “double dipping” appears to be permitted unless

(i) the parties explicitly agree to an ··Anti-White” order during negotiations;

(ii) a portion of the business’ cash flow is required to be reinvested to either capitalize or diversify the business; or

(iii) sufficient evidence is presented that demonstrates a business is valued using a stream of future income.

For the third possibility, credible CPA testimony will be key.